This post is a little late tonight, but I’m recovering from quite a weekend. After my last post, I suddenly came down with some sort of stomach bug and was up all night sick. Luckily for us I was at about 85% recovery on Saturday night and we were still able to make STOMP at the Palace Theatre down town. It was a great show and we had a nice time. We also hit up Max and Erma’s in the Arena District afterwards which was good.

Other than that, not too eventful of a weekend as I just took it easy. I knew it was only a matter of time before I caught the bug in some form that all of my family has had. But I’m glad I’m almost back to normal. It’s not fun being sick on a weekend.

As for today, things definitely  weren’t a normal schedule, but they were eventful. I had an opportunity to catch lunch with my pastor today at Wendy’s which was nice. We went to the Wendy’s I used to work at back in high school/college. Though I’ve been there since then on a weekend, I haven’t visited on a weekday lunch in years. I got to see some of my old co-workers and they were pretty excited to meet Jackson which was neat. As for lunch though, oh goodness. I was so embarrassed as Jackson was out of control. This kid did everything from throw his food, run around, pout, and even a random nose bleed! For the record, his nose has been dry since he’s got home and this has happened. We got a humidifier which has stopped his nose from bleeding. Well, last night was the first night we decided not to use it, and today shows that wasn’t a good idea.

But, whatever, I love the kid and he was cute. Luckily my pastor can relate – he has a family of four with his youngest daughter who was just adopted from China in the last year. So it was a good laugh to watch me struggle with my two year old.

As for this evening, as Lindsey was headed home my friend Ryan called and wanted to know if we could babysit Thor and Solomon for a couple of hours while they attended a class at their church. We agreed and Jackson had a fun time playing with his friend! They got along pretty good. What’s interesting is that Thor is about three months younger than Jackson, but he looks so much older! Obviously this is because of Jackson being an orphan and being such a small guy, but it’s funny to see these boys together. But Jackson is gaining weight and doing well. 🙂 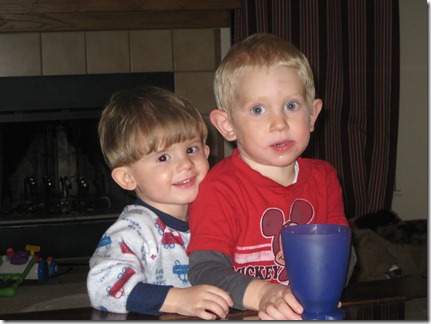 A funny story for the day. Jackson did something really interesting today. Awhile back Jackson’s three year old cousin Reagan gave up her pacifiers to give to Jackson. That’s a funny story in itself, but anyway, the craziest thing happened today as I was getting him dressed. Jackson found one of the pacifiers in his room, immediately put it in his mouth, sucked away, and laid in his crib! He acted like he had been using them his whole life! We’ve never given him a paci before, and I’m fairly certain he’s never had one at the orphanage as they were very strict about the orphans not having any sort of security item. So strange! He kept putting it in his mouth throughout the evening and gets so mad when I take it away. I don’t know if I want him to have them or not, as I know later it’s such a hard habit to break. Thoughts? Anyway, so bizarre!

It’s late, so I’m out! Goodnight and thanks for reading.