Well, after yesterday of myself whining about what a lazy day I had, Jennifer from our LifeGroup at church saved the day today! Jennifer watches her own daughter Iris throughout the day as well as Wesley, who is the son of another couple from our group (Jared & Bethany). Once a week or so she visits a children’s museum in Lancaster called AHA! Well today, she gave me a call and wanted to know if the two of us would come tag along. We did and had a great time!

Just yesterday my friend Cara recommended we visit this place. I will say, out of all of the suggestions that have been brought up to me since I started blogging my Adventures of a Stay at Home PaPa, AHA! has been the place that has been mentioned to me time and time again. I had never heard of this place prior to adopting Jackson, but I guess that can be expected since there was no reason for me to know about it. You hear about places like COSI and what not, but AHA! is a museum just for young kids. It’s a perfect environment where you don’t have to worry about your kid getting hurt, (Though Jackson did cry after trying to stick his head in a cut out of a Triangle.. Ha.) and you can kind of let your kids just roam around on their own. Jackson had a blast today dressing up as a Firefighter and playing in a really big toy fire truck that made siren noises and put out “flames”. There was also all kinds of other activities like a pretend grocery store, a singing stage, piano, dress-up closet, sand pit, a honey-comb like maze, and a huge water table with things to splash around. Wes & Iris were pros at this place and quickly played with activity after activity. Jackson quickly caught on though, and was soon into just about anything he could get his hands on. I’ll definitely have to try this place out again. Thanks Jennifer for letting us tag along!

Today really wore Jackson out. After we left he started to fall asleep in my car. Since we were in Lancaster we made a quick visit to his grandparents for lunch, hung out a bit, then headed home. Jackson fell right asleep for his nap and slept a long time. Actually I just woke him up finally, because we need to get dinner ready to make it out in time for LifeGroup.

So today was a 180 degree turn from yesterday. I’m glad we were able to get out of the house and do something new and fun. Maybe we’ll go out in the snow tomorrow for a TGIF treat! 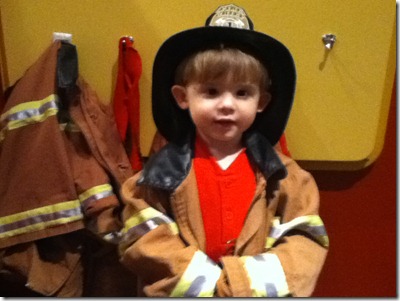