Jackson must have known that I was getting jealous of all the attention that he shows his Papa!  Today he was definitely a Mama’s boy.  We visited him in the morning and he was wearing the clothes that we had given him last night, complete with last night’s baby food stain.  No painter bear shirt!  I got a few other shirts that I might take later this week for him.

Jackson is starting to expect a snack from us, especially the jar of baby food.  So, that’s how he started out today.  I also found a pail with a lid, so I stuck some small toys in it and took it to the orphanage today.  He latched onto it!  He loves new things and does not like to put them down!

Towards the end of our visit, Scott got out his iPod.  The two of them were looking at videos, and one came on of Jackson and I.  He looked intently on it and then pointed at it and said “Mama!”  Yay!  After a while Jackson decided that he needed to hold the iPod, so Scott carefully let him do it.  And- I kid you not- that kid opened up his pants pocket and put the iPod in it!  It cracked us up!

After he was done with the videos and pictures, he got really cuddly.  He hasn’t had much physical touch during his life in the orphanage, and I think he is enjoying cuddling with us.  Usually I’ll rock him like a baby and Scott and I will sing kids songs to him.  Today he came up to me and laid on my shoulder and we rocked for a long time.  Scott said Jackson’s eyes were getting heavier and heavier.  All of a sudden he jumped up and made a bee line for the door.  We soon learned why, it was because he heard the nurse in the hallway mention lunch.  So, he was a Mama’s boy for a little while, but still all boy at heart who jumps at the opportunity to eat! 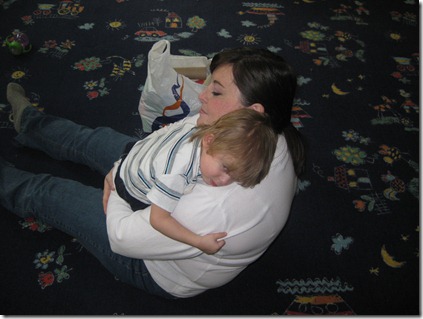