So, last Tuesday the much talked about debate between Bill Nye vs. Ken Ham took place surrounding the topics of Creation vs. Evolution. This event was hosted at the Creation Museum, by the group Answers in Genesis. It definitely peeked our family’s interest, as we have shared this group’s theology for quite some time and even were able to tour the museum ourselves last October with the kids.  The debate idea came about after Bill Nye had made a YouTube video in which he spoke out on his thoughts that teaching Creationism was a danger to children. Although it would be easy to assume, this wasn’t a debate of whether or not evolution is right or creationism is wrong.  But as expected that is how it was perceived by most everyone in the media. The actual topic of the debate was “’Is Creation A Viable Model of Origins in today’s modern Scientific Era?”

So did anybody actually win this supposed debate of the ages?

Even with the fact  that most people misunderstood the specific topic at hand, I think it’s fair to say we were far outnumbered by secularists in this world to call a clear winner – if you followed Twitter during the debate it’s easy to see what the majority of people felt about the evening.  Before this debate even started I’m sure Ken Ham and most Bible believing Christians realized this wasn’t a debate that was going to be “won”. If before this debate you’ve never considered the Authority of God’s Word, it’s unlikely (yet not impossible with God) that anything Ken Ham said could have changed your mind on the topic. And if you were already so hard hearted to God’s Truth – you were probably one of many who kept your foot outside the door at watching once you realized that the organization itself runs a museum that shows dinosaurs living next to Adam and Eve (something akin and familiar to maybe say.. The Flintstones), and proclaims that the earth is a mere young six thousand years old. If all you’ve grown up and been fed your whole life in science class is Evolution, I can’t say I blame you. I too once accepted Evolution as truth, and wrongly worked it out so it somehow made sense in conjunction with my then closed-minded view of God.

Therefore if you really want an opinion on who won, just pick your side, and read blogs that correspond with that view, and you’ll have your winner. I’m not saying I don’t think Ken Ham won the argument, in fact I do think his argument was sound and with it being rooted in God’s word I’ve had no problems with his view of the origin of life nor any issue with anything Answers in Genesis has produced in the last several years.  If you are indeed Bible-minded I think you will find Ken Ham’s analysis is right on and very convincing as his conclusions are rooted in the same observational evidence that evolutionists and creationists share in the first place.  We just have a different starting point – The Bible.

So, in my mind neither Bill Nye nor Ken Ham won this debate. However, I still believe victory is due. If I had to call a winner I think the obvious champion in the debate was God’s Word itself. Time and time again Ken found an opportunity to preach the “Good Word” itself, and wasn’t that the point of this debate all along?

Secularists will bark at this and say it proves their point Bill Nye shouldn’t have debated with Ken Ham in the first place, but to this camp we are reminded that they are blinded to spiritual things, blinded “to keep them from seeing the light of the gospel of the glory of Christ, who is the image of God” (2 Cor. 4:4), showing that the debate in question was already a closed book for them before it ever began. Ken Ham knew this.

Though God can heal those hardest-hearted of unbelievers and give them the light they need to understand the Truth – the debate was orchestrated by God to save those whose unregenerated hearts were already conditioned and ready for that very moment on February 4th. Those unsaved that God prepared their hearts long ago for this very debate to hear from Ken, the need inside they felt that has dwelled for a Savior. The moment prepared where God finally opened people’s eyes to the Truth. It was for those that on that night or whoever will watch the debate in the future, who have already started to realize the depravity of their sin.

And that is amazing. Because our God is unlike any other religion. Christianity is the one religion where God seeks sinners and saves them with no work of their own. People have already been or will soon be saved thanks to preaching of God’s Word.

An understanding that dinosaurs lived with men? Noah actually being able to save his family and all animals in a global flood?  Believing that our earth is only six thousand years old?  The discernment to understand those topics will come, and will only come when God opens the eyes of the blind like He has been doing this past week. To that we owe all praise to Him! 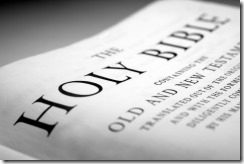 Earlier I outlined my statement of faith, focusing on several areas including Scripture, God, Creation, Angels, Man, Salvation, Maturity, and the Church. My goal is, over time, to explain in greater detail most of these topics. Some topics might overlap, but for the most part this will be a good way to keep the flow of this series intact. I do find it very important that I explain why I believe in the authority of Scriptures. To remind ourselves where I stand, here is what I quoted from my last posting:

Scripture
I believe in the verbal, plenary inspiration of the 66 books of the Old and New Testament. The Bible is the very Word of God without any mixture of error and is therefore our only authority in all matters of faith and conduct (II Timothy 3:16; II Peter 1:21; Matthew 5:17-18)

If you cannot accept the Bible as the sole authority on spiritual matters, it would be next to impossible to try to examine the other areas of my faith with seriousness. The Bible is simply that important and really becomes the foundation from where we find all of our answers and beliefs in Christianity. I am well aware there are many critics of the Bible, but I for one believe it to be absolute truth and the Word of God, given to us as a gift so that we have the opportunity to learn about the message of Christianity and the Bible as a whole – which is Jesus Christ. But, why? Why believe a book that was written centuries ago? Why place my entire self and beliefs taught from a book, and not in myself? I am a smart individual, I do listen to logic and reason. Is it possible I can have these attributes and have belief in the Bible? Yes. I’ll try to explain why and how I’ve come to the realization that I can depend on the Scriptures and have no doubt in its integrity.

END_OF_DOCUMENT_TOKEN_TO_BE_REPLACED

I am writing this series to inform people what I believe to be absolute truth. It is my hope that through these postings that I will be able to give a better idea of my beliefs and be able to offer encouragement to others who are seeking out Christ, or to provide at least some perspective on why I hold so strong to my faith. To Christians and Non-Christians alike, I ask that you please read in the months ahead with an open mind. I realize their might be some differences in opinion or specific doctrine that I dwell on, but ask that we can carry on this discussion in a respectful manner. My intent here is not to save you – only God can open your eyes and ears to the truth. My goal is just to inform you the best I know how, about the grace that God can provide in your life.

I wanted to start by showing part of the church’s constitution that I attend, as its Statement of Faith aligns perfectly with mine. I’ve replaced “We” with “I” to make it a bit more personal. This might seem a bit mundane, but I feel it is important that I showcase this, as I will use it as a foundation for the rest of my posts and will be something that I reference back to continually on various topics.

END_OF_DOCUMENT_TOKEN_TO_BE_REPLACED

It is my hope that 2012 has been great to everyone so far! It’s been great to us. As we’ve entered into the last tail end of this winter, I’m reminded again how much has changed for us in a year. It was about this time last year when we were getting ready to move to Indiana. Though 2011 hasn’t seen as quite of a whirlwind of change that 2010 saw in our adoption of Jackson, it is quite obvious our family has a lot of new blessings to look back on from this past year. We have a new home, a new church family and we are making some new friends as well. I tend to sometimes take things for granted, so it is nice to kind of sit back and reflect on things like this from time to time and realize how fortunate we have been. All of these things of course have been a blessing from God to which we owe all praise!

As my life has been nothing but ongoing changes throughout the last year, I’ve felt it’s come time again to revaluate the purpose of my blog. Though I’ve only been at this web address for part of the time, I have been blogging for nearly a decade. Throughout the years if you’ve been with me for that long you’ve watched how I grew into an adult after graduating high school and entering college, how I thought I would forever be cursed to single-hood, to being able to witness watching me grow in my faith alongside my wife Lindsey as we took a big step in following God’s will and adopting our first son. Since then we’ve had our move, as well as myself making the big change from the world of business to the world of a homemaker and kid chaser as a stay-at-home parent.